Accident Benefits Newsletter - a Concussion Is (Still) Not a Minor Injury 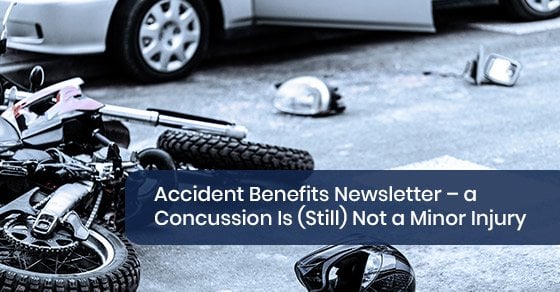 It is generally acknowledged that the Minor Injury Guideline (MIG) does not extend to traumatic brain Injuries (TBIs), regardless of the degree of initial severity. Any brain injury from mild to severe is equally outside the ambit of the MIG. It is also acknowledged that a concussion and Post-Concussion Syndrome (PCS) qualify as mild TBIs. Despite these acknowledgements however, Accident Benefits insurers continue to fight tooth and nail to keep concussion victims in the MIG.

This aggressive position is based in part on the nature of concussion as the "invisible injury" - it does not show up on CT scan, and can occur without loss of consciousness or even a direct head trauma. Therefore, diagnosis of concussion and PCS often relies on patient self-reports, ongoing symptoms and treatment provided. From the insurer’s point of view, this presents the possibility that a claimant will exaggerate or misrepresent symptoms for secondary gain. Presumably, it is considered "prudent" to treat most allegations of concussion and PCS as fraudulent to limit claims paid out.

A review of recent case law from the Licence Appeal Tribunal (LAT) highlights several key elements that lead to a successful MIG challenge for concussion victims.

In N.K. v. Unica Insurance Inc.(2017 CanLII 69462), the applicant provided strong, uncontradicted technical evidencedemonstrating that concussion and PCS are mild TBIs. From this vantage, Adjudicator Ferguson was required only to determine whether he had suffered the injury and ongoing impairments noted in his medical records. The records included a concussion diagnosis by the applicant’s family physician in later 2015 and consistent ongoing complaints of PCS symptoms for the next year, including chronic fatigue, migraines and chronic dizziness. The applicant was also diagnosed with Benign Paroxysmal Positional Vertigo in late 2016 by his treating otolaryngologist. Finally, his treating neurologist confirmed the PCS diagnosis at the end of 2016 and referred him to an optometrist for further vision testing.

Unica attempted to dismiss the claim by arguing that its neurologist was unable to identify any neurological deficits on CT scan. It also argued that the applicant’s symptoms could not be causally connected to the collision because he did not suffer a loss of consciousness at the scene, and these symptoms manifested over time as opposed to immediately. Finally, it claimed that the initial injury was not severe enough to cause the persistent ongoing impairment described by the claimant

Adjudicator Ferguson did not find Unica’s position persuasive. He found it telling that none of Unica’s experts addressed the issue of concussion or PCS at all, which was the basis of the dispute. The technical evidence provided by the applicant showed that:

As a result, the applicant was removed from the MIG.

In S.W. v. Aviva Insurance Canada(2018 CanLII 83500), the applicant was struck in the head by a truck’s passenger-side mirror while riding her bicycle. She also impacted the ground with enough force to break her helmet. Despite the nature of the collision, and her consistent self-reports of ongoing post-concussion symptoms, Aviva adjusted her claim under the MIG. It argued that the injuries were minor because the initial diagnosis provided by the applicant’s family physician did not include a head trauma or concussion.

In support of its position, Aviva relied on reports which diagnosed soft tissue injuries and headaches and was properly treated under the MIG. Most significantly, one of the assessors claimed that the medical literature clearly stated that symptoms of concussions should appear "at the time of trauma". Since the applicant’s family physician did not make this diagnosis at the initial post-collision appointment, the concussion claim was not credible.

Adjudicator Mazerolle did not accept Aviva’s position. He explained that the fact that no concussion symptoms were noted initially was not fatal to the claim. It was understandable that the focus of the initial visit would be the widespread pain across the applicant’s head and body. The concussion symptoms were identified on the second and subsequent visits. The applicant’s elevated scores on the Standardized Assessment of Concussion Test-2 (SACT-2), corroborated her self-reports. While he did not find it determinative, the adjudicator also noted that the ER report described the applicant as "experiencing confusion and difficulty concentrating". While it did not provide a formal concussion diagnosis, this report did establish symptoms "at the time of the trauma".

Most recently, in H.S. v. Aviva Insurance Canada (2019 CanLII 83893), the applicant suffered a concussion after she was struck by a car. Her head struck the ground, causing a laceration above her left eye that required seven sutures. Aviva again placed her claim under the MIG, on the grounds that she only saw her family physician 19 days post-collision, and he did not diagnose a concussion (although he identified the head wound in his initial consult). The insurer argued that a concussion diagnosis and evidence of ongoing symptoms provided by the applicant’s treating chiropractor did not constitute proper evidence. Also, it pointed out that the ER report did not identify loss of consciousness or concussion, and that the applicant’s Glasgow Coma Scale score was 15 (normal). Further, there was no evidence of acute intracranial abnormality on CT. Finally, Aviva’s experts all agreed that her injuries were predominantly minor in nature.

In this case, the applicant’s own evidenceplayed a prominent role. It was undisputed that she suffered a head injury. She described her ongoing post-concussive symptoms including dizziness, sleep disturbance and headaches. She also explained that, unbeknownst to her, her family physician had relocated, and it was several weeks before she was able to get an appointment with him. In the interim, she attended a clinic that provided chiropractic, massage and physiotherapy. The treating chiropractor provided the original disability certificate (OCF-3), which identified concussion and other injuries.

Significantly, the applicant attended at the ER again 3 days after the collision, complaining of headaches, nausea and dizziness. The treating physician at the hospital diagnosed a concussion[1]. Based on this diagnosis, and the corroborating evidence provided by the applicant, Adjudicator Harper found that the MIG did not apply. She specifically rejected Aviva’s contention that the fact that the applicant

[1]In defence of Aviva’s experts, these hospital records, the treating clinic’s notes and the OCF-3 were not provided to them initially. The insurer tried unsuccessfully to argue that late reports considering these materials should be allowed.

receive further physician-based treatment for her head injury and ongoing post-concussion symptoms demonstrated the minor nature of her injuries.

From these cases, and in our experience more broadly, insurance companies will generally view claimant reports of concussion or post-concussion symptoms with scepticism, preferring to place such claimants in the MIG unless challenged. The typical justification for this practice is that injury victims often report headaches, dizziness and related symptoms as part of a Whiplash Associated Disorder or general soft tissue injury claim. Insurers will rely upon conventional imaging and/or general practitioner and neurology assessments to argue that there is no "objective" evidence supporting the claimant’s complaints - implicitly, the claimant is exaggerating or mis-stating her symptoms. In support, they will often claim that the reported symptoms are excessive given the "minor" nature of the collision.

It is important to recognize that concussion and PCS are only demonstrated through subjective evidence in many cases. It can be identified through sophisticated imaging techniques like SPECT and functional MRI, but these are expensive and relatively scarce resources that rarely get utilized in a timely fashion. Because it is an "invisible" injury, it is crucial that symptoms are reported consistently and as soon as they present, even if other injuries are more prominent following the collision. Also, it is beneficial to emphasize to the insurer at the outset that the concussion symptoms:

They know these facts. Reminding them that we also know them, and providing scientific evidence in support if necessary, is the first step in a successful MIG challenge.

Please do not hesitate to contact us if you have any questions related to these issues. Campisi LLP - Clients First, Excellence Always!

The Canadian Association of Nuclear Medicine (CANM) has unanimously embraced a new method and set guidelines for brain single-photon emission computed tomography (SPECT) imaging for neurology and psychiatry. The news on this landmark decision was released on July 16, 2021.

Every year, over half a million Canadians sustain a traumatic brain injury. Motor vehicle accidents account for more than 50% of all acquired brain injuries, this according to the Brain Injury Society of Toronto.