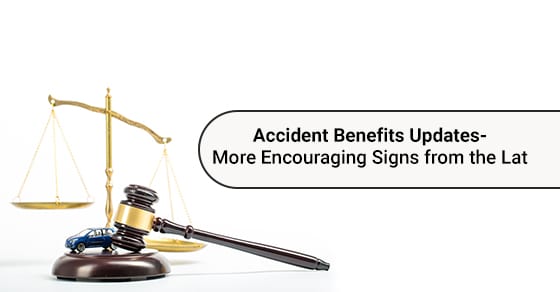 As we have discussed at length in recent posts, initial concerns regarding the competence of the Licence Appeal Tribunal (LAT) may have been somewhat overstated. This is not to say that accident victims are uniformly receiving appropriate adjudication at the LAT, as many decisions have come under fire for "cookie-cutter" responses and other failures. However, as the recent Reconsideration of 16-002325 v Aviva Insurance Canadashows, when such failures do occur, there is hope that a correct result can still be achieved.

The Applicant, M.B. was injured in a motor vehicle accident on November 21, 2013. Despite the accident, she continued to work for almost the next 21 months until September 1, 2015, when she underwent neck surgery.After the surgery, she was unable to work. She therefore applied to Aviva under the Statutory Accident Benefits Schedule (SABS)to receive income replacement benefits (IRBs). She submitted a Disability Certificate dated November 27, 2015, indicating that she was substantially unable to perform the essential tasks of her pre-accident employment and, thus, eligible to receive IRBs.

Aviva initially refused to pay the IRB claiming that it was unclear whether the impairment was clearly or directly caused by the collision. No other "medical or other reason" was provided. Aviva scheduled five medical assessments to determine M.B.’s entitlement.

M.B. attended the assessments which collectively found that she was entitled to IRBs one week post-surgery. However, by the time this was determined, M.B. was approaching the two-year anniversary of the collision. At this point, the test for IRB entitlement becomes more stringent. Therefore, Aviva immediately ordered another five assessments to determine whether M.B. met the more stringent "post-104" IRB test. Again, the only medical or other reasongiven was that it was unclear whether the impairment was clearly or directly caused by the collision. M.B. failed to attend the first assessment, and IRBs were suspended pursuant to s. 55 of the SABS, which bars a claimant from proceeding to the LAT until it has attended the insurer’s assessments.

M.B. commenced a LAT proceeding over the issue. At the case conference a hearing to determine the preliminary issue of whether she was barred from proceeding for failing to attend the assessments as required was arranged. At this hearing, Aviva argued that the SABS was clear on the issue, and until she attended the requested assessments, M.B. was not legally entitled to commence a LAT proceeding. M.B. argued that Aviva’s notices of examination were insufficient, because they failed to provide "medical and other reasons" with enough clarity to satisfy the requirements under the SABS, and therefore the IRB dispute should be allowed to proceed.

The Tribunal also agreed that Aviva’s stated reason for the assessments did not constitute a valid medical reason as required by s. 44(5)(a) of the SABS. Shockingly, though, it refused to consider this issue because it found that M.B. should have should have raised the argument "at the case conference or before, so that [Aviva] could have had the opportunity to either respond or remedy the notice". As a result, the Tribunal found that M.B. was barred from proceeding until she attended the proposed assessments, recommending that both parties should be more flexible regarding scheduling.

M.B. sought a Reconsideration of the Preliminary Issue hearing before Executive Chair Lamoureux. She argued that the Tribunal had erred in refusing to adjudicate the sufficiency of Aviva’s notice.

Ms. Lamoureux agreed, acknowledging that the timing of when the issue was raised is immaterial- and, in any event, the sufficiency argument was raised at the case conference (a fact that was overlooked by the Tribunal). She stated that for Aviva to rely upon s. 55, it had to give proper notice of examination including all medical and other reasons for the assessment. While medical and other reasons will be dependent upon the unique facts of each claim, at a minimum they should:

include specific details about the insured’s condition forming the basis for the insurer’s decision or, alternatively, identify information about the insured’s condition that the insurer does not have but requires. Additionally, an insurer should also refer to the specific benefit or determination at issue, along with any section of the Schedule upon which it relies. Ultimately, an insurer’s "medical and any other reasons" should be clear and sufficient enough to allow an unsophisticated person to make an informed decision to either accept or dispute the decision at issue. Only then will the explanation serve the Schedule’s consumer protection goal.

Ms. Lamoureux found Aviva’s stated reason both irrational and not the actual basis for the request. It was irrational because the same reason had been provided in the first round of assessments, which had established that M.B. was entitled to IRBs. Implicitly, the impairments leading to her neck surgery WERE clearly and directly caused by the collision. The actual reason for the second round of assessments was the more stringent post-104 IRB test.

As a result, Ms. Lamoureux concluded that Aviva had not provided adequate notice of examination and s. 55 did not bar M.B. from proceeding with the LAT hearing.

This Reconsideration demonstrates that with proper legal representation, an injured claimant can succeed under the LAT accident benefits regime.

If you have been seriously injured in a car accident and have questions about Income Replacement or other benefits, please do not hesitate to contact us for a free consultation. At Campisi LLP, we live by our "Clients First, Excellence Always" philosophy. We are ready to work for you.

Since the onset of the COVID 19 crisis, our healthcare workers have been subjected to ongoing and almost relentless stress.