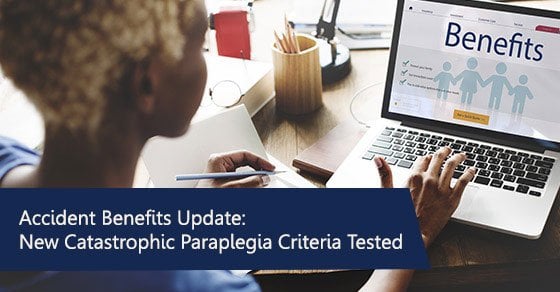 In Patel v. RSA Insurance (19-000560-AABS), a recent decision before the Licence Appeal Tribunal, a dispute arose over the new Paraplegia criteria for meeting the definition of catastrophic impairment. The applicant, Aiysha Patel suffered a severe spinal cord injury in a car accident. She sought a determination that she was catastrophically impaired (catastrophic) under the Statutory Accident Benefits Schedule (SABS), which would entitle her to greatly enhanced ongoing benefits from RSA, her insurer.

Under the current SABS, an applicant must show that her neurological impairment is permanent and that it corresponds to one of four grades under the Asia Impairment Scale. This scale assesses the applicant’s degree of sensory and motor function from grade A (no sensory or motor function) to E (normal). The applicant will be catastrophic if her permanent ASIA grade is A, B (Sensory Incomplete) or C (Motor Incomplete). She can also be catastrophic with a grade D impairment. Grade D is also described as Motor Incomplete, but a greater degree of muscle function is retained. In order to meet catastrophic, grade D impairment must be combined with one of several additional impairments, including a score of 5 or less on the scale of 0 to 10on the Spinal Cord Independence Measure (SCIM) which measures the applicant’s mobility.

The applicant was injured on November 10, 2016. Her neurologist, Dr. McGllivray originally assessed her with a grade C ASIA impairment on December 14, 2016. On re-examination January 17, 2017, he assessed her as grade D. Her neurosurgeon, Dr. Jha agreed with this classification.

Based on these assessments, the applicant sought a determination of catastrophic impairment. RSA denied the application, which led to this dispute. Following a June 2, 2017 assessment, RSA’s neurologist, Dr. Farhadiagreed that the applicant was grade D and that she met the SCIM criterion with a score of 4. However, he opined that establishing a permanent ASIA grade was premature because the applicant’s impairment could continue to improve.

The applicant argued that theParaplegia criteria did not include a "timing" component. If the legislature had intended that a certain amount of time had to pass prior to the determination, it would have specifically included it as a component - as it had for brain impairments and Whole Person Impairments for example. According to Dr. Jha, at thirteen months post-collision, the applicant did not appear to have made any additional functional recovery. The applicant claimed therefore that she had met the permanency requirement under the ASIA scale. As well, she stated that the SABS is consumer protection regulation. It is meant to be read inclusively to provide timely access to benefits for the most seriously injured claimants. Denying her catastrophic application based on Dr. Farhadi’s reasoning would not be consistent with these objectives.

Adjudicator Johal agreed with the applicant’s position. He explained that determining permanence for catastrophic is a legal test, not a medical one. In support of Dr. Jha’s opinion, the adjudicator noted that the AMA Guides used to evaluate catastrophic define "permanent impairment" as "unlikely to change substantially and by more than 3% in the next year with or without medication." He accepted that the applicant’s condition was permanent by this definition.

The adjudicator gave little weight to Dr. Farhadi’s opinion regarding the applicant’s possible ongoing recovery. He found that this opinion exceeded the role expected of a medical expert - to provide evidence related to the applicant’s condition. Instead, it was an attempt to interpret the Guides and direct the result of the catastrophic determination that was not supported by any evidence suggesting future functional improvement.

As a result, Adjudicator Johal found that the applicant was catastrophically impaired.

IMPACT: This decision will be important going forward for victims of spinal cord injuries because it encourages grade D ASIA applicants to apply promptly for catastrophic once "permanent impairment" from the injury can be identified. At the same time, it provides a strong response to insurer stall tactics employed in the hope that the applicant will eventually recover.

If you have been seriously injured in a car accident and have questions about this decision, catastrophic or your claim generally, we are pleased to offer a free consultation. Put Campisi LLP to work for you - Clients First, Excellence Always

Applicant v. Toronto Transit Commission (2019 CanLII 101715) was a recent proceeding before the Licence Appeal Tribunal (LAT) to determine whether the unnamed Applicant had sustained a catastrophic impairment (catastrophic) as a result of injuries he sustained after being struck by a streetcar...

In V.L. vs. Pafco Insurance Company (2019 CanLII 119760), a recent hearing in writing before the Ontario Licence Appeal Tribunal (LAT), the applicant, V.L sought payment from Pafco, her insurer for the costs of her assessments to determine catastrophic impairment (catastrophic). Pafco had...