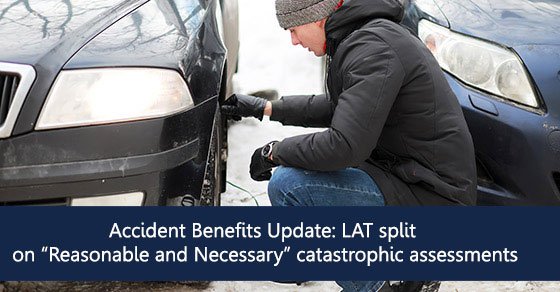 In V.L. vs. Pafco Insurance Company (2019 CanLII 119760), a recent hearing in writing before the Ontario Licence Appeal Tribunal (LAT), the applicant, V.L sought payment from Pafco, her insurer for the costs of her assessments to determine catastrophic impairment (catastrophic). Pafco had approved approximately 2/3 of the requested $25,719.25, denying the remaining $8,884.00 on the grounds that these costs were not reasonable or necessary. Two denied Chiropractic treatment plans were also in dispute.

The applicant had been injured in a car accident on March 10, 2014, and continued to suffer from physical, cognitive and psychological impairments. In order to determine whether she was Catastrophic , she commissioned Psychiatric and Neuropsychological assessments, a Functional Abilities Evaluation (FAE) and a Biopsychosocial assessment.

Under s. 25 of the Statutory Accident Benefits Schedule (SABS), an insurer shall pay for reasonable fees for the determination of whether an applicant is Catastrophic , including any assessment or examination necessary for that purpose. The cost of any one assessment is limited to $2,000. Both the Psychiatric and Neuropsychological assessments were submitted as two distinct treatment plans - Part One for the testing, and Part Two for scoring and analysis. The proposed cost for each part was the statutory maximum of $2,000.

Pafco approved the initial Psychiatric and Neuropsychological assessments. However, it refused to fund the proposed Part Two assessments, the FAE or the Biopsychosocial assessment. It argued that the two proposed parts represented one assessment in both cases, and that they had been arbitrarily divided to avoid the statutory maximum. It also took the position that the FAE and Biopsychosocial assessment were not required to determine the applicant’s catastrophic status, given the wealth of other evidence available.

Adjudicator Boyce of the LAT agreed with Pafco that the Part Twos were not reasonable and necessary. He dismissed the applicant’s claim that they were separate and distinct and were necessary to determine Catastrophic , observing: "In both parts of the psychiatric and neuropsychological assessments, the same purpose and goal is identified, the assessments have the same authors and are conducted on the same date". While he recognized that Psychiatric and Neuropsychological assessments involved a significant investment of time, the Adjudicator found that splitting them into two parts was a strategic decision driven by the clinic and not by necessity or some direction in the SABS or jurisprudence. Funding for multiple assessments in one domain should only be granted in cases where two distinct investigations are contemplated.

Regarding the proposed FAE, Pafco claimed that it was duplicative of the two Occupational Therapy assessments that it had already approved. On the contrary, the applicant claimed that an FAE might be the most important part of a Catastrophic determination, because it evaluates the loss of function that establishes an applicant’s level of impairment wile identifying potential barriers to recovery and reintegration in the workforce.

Adjudicator Boyce accepted the applicant’s position. He agreed that an FAE provides useful information for use in determining Catastrophic, despite any potential overlap with the OT assessments, noting:

Although not part of the legal test, I have found the FAE helpful in providing insight into what applicants in catastrophic disputes can and cannot do in the workplace and how their pre- and post-accident function has been altered. In turn, I agree that this information will be helpful to the overall determination of V.L.’s functional abilities.

In contrast, Adjudicator Boyce did not accept that a Biopsychosocial assessment was a reasonable and necessary cost. The applicant claimed that it would be used by the psychiatrist completing the Psychiatric assessment, and that it could provide context for the results of the other assessments. Additionally, it used the Holmes-Rahe Life Stress Inventory test, which was unique in its ability to identify stressors that might lead to illness.

The Adjudicator recognized the potential use-value of the Holmes-Rahe test in certain situations but did not feel that it was necessary in this case to reach a catastrophic determination, as there was sufficient other evidence in the approved reports and medical file. He noted that the applicant’s experts did not require data from the Holmes-Rahe test to make a determination of Class 4 (Marked) impairment for a Mental and Behavioral Disorder. While useful, there was no reason to fund an entire assessment to glean this information.

If you have been seriously injured in a car accident and have questions regarding your entitlement to enhanced catastrophic benefits or your claim generally, we are pleased to offer a free consultation. Put Campisi LLP to work for you- Clients First, Excellence Always!

In Patel v. RSA Insurance (19-000560-AABS), a recent decision before the Licence Appeal Tribunal, a dispute arose over the new Paraplegia criteria for meeting the definition of catastrophic impairment. The applicant, Aiysha Patel suffered a severe spinal cord injury in a car accident. She sought...

Applicant v. Toronto Transit Commission (2019 CanLII 101715) was a recent proceeding before the Licence Appeal Tribunal (LAT) to determine whether the unnamed Applicant had sustained a catastrophic impairment (catastrophic) as a result of injuries he sustained after being struck by a streetcar...