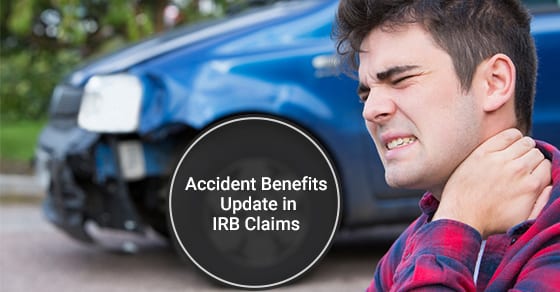 In Applicant and Aviva General Insurance, the Applicant sought Income Replacement Benefits (IRB) up to 104 weeks post-accident and ongoing.  He had been injured on August 10, 2015, and received IRBs from Aviva, his automobile insurer, from August 15, 2016 until November 15, 2016.  Aviva scheduled several medical examinations of the applicant during this period. Ultimately, it terminated his IRBs based on these examinations, which concluded that the applicant was able to perform the essential duties of his employment.

Member Ferguson considered the Applicant’s psychological impairments more closely.  He had been subjected to numerous psychological assessments, with no evidence of malingering or symptom exaggeration.  A May 2, 2017 report by Dr. Cook diagnosed an unspecified anxiety disorder and moderate depressive episode with somatic symptoms.  These impairments were related in the report to specific components of any sales job- dealing with the public, remembering details, concentration and difficulties with motivation.  Dr. Cook concluded that the Applicant was substantially unable to perform the tasks of his pre-accident employment.

Aviva submitted an October 13, 2016 report by Dr. Syed that diagnosed an adjustment disorder with mixed anxiety and depression.  However, Dr. Syed concluded that these impairments did not prevent the Applicant from performing the essential duties of a sales agent".

Member Ferguson considered both reports but preferred Dr. Cook’s opinion, because Dr. Syed’s report did not consider the actual tasks the Applicant would have to perform or provide any reconciliation between her diagnosis and her conclusions.  As a result, he found that the Applicant’s psychological impairments met the test for IRB eligibility until the 2-year mark (at which point, the test becomes more stringent, as discussed below), if he could demonstrate they were caused by the accident.

The central issue in this proceeding was whether the Applicant’s IRB eligibility was invalidated because his ongoing psychological impairments could be attributed to factors other than the collision.  Relying upon the clinical notes of the Applicant’s Family Physician, Aviva contended that the psychological difficulties in question predated the collision and were in fact caused by his marital breakdown and the stress of becoming the primary caregiver for his children.

The Applicant did not deny that these factors impacted his overall psychological health. Significantly, he did not mention them to any of the three post-collision assessors, despite questions specifically targeted at his home life.  Neither did he mention these concerns to his treating psychologist post-collision.

Aviva argued that this failure to disclose relevant information led the Applicant’s assessors to erroneously attribute his psychological impairments to the collision, instead of identifying the actual cause of his failure to return to work at age 65- ongoing issues arising from his failed marriage and the demands of carring for his children.

Member Ferguson expressed concern over the Applicant’s non-disclosure.  However, he was mindful of the following principles:

Bearing these in mind, Member Ferguson concluded that the collision was a cause of the Applicant’s inability to return to work.  In support of this conclusion, he noted that the three assessors accepted as plausible that the Applicant’s impairments followed from his accident and recovery.  As well, although she was aware of the Applicant’s marital breakdown, the treating psychologist specifically identified the collision’s impact on his "adaptive ability" in her clinical notes.  Finally, Aviva offered no evidence in support of its theory, and failed to schedule an addendum assessment or paper review once it became aware of the non-disclosure.

Two years post-accident, the IRB eligibility test changes from a claimant’s ability to perform the essential tasks of his own occupation, to the essential tasks of any occupation to which he is reasonably suited.  Interpretations of the "any occupation" test have varied greatly in individual claims. In this claim, the Applicant had always worked as a real estate agent and was 65 years old. He argued that in his circumstances, the two tests were essentially the same, as he was unlikely to find any work for which he was reasonably suited that would be manageable in a "competitive, real world setting", given his acknowledged psychological limitations.

Member Ferguson agreed that any sales position approaching the Applicant’s pre-accident status and income would be as overwhelming as real estate.   Therefore, he found that the IRB entitlement should continue beyond the 2-year mark.

If you have questions about your IRB entitlement or have recently had your benefits terminated, please contact us for a free consultation.  At Campisi LLP, "Clients first, excellence always" is the foundation of our personal injury practice.  Put us to work for you.